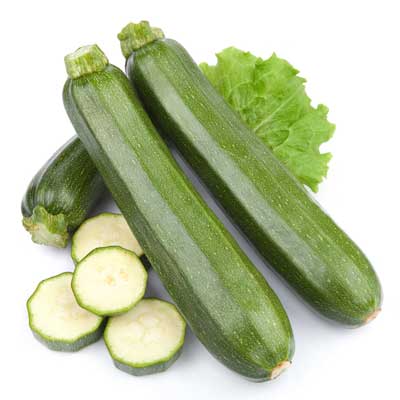 Zucchini is a vegetable of the family of Cucurbitaceae where we find more than 850 species of plants that produce large fruits protected by a firm crust. The melon, the watermelon, the cucumber or the pumpkin belong to this same family. Within the species Cucurbita pepo are distinguished two subspecies: the ovifera and the pepo. To this last subspecies belongs the zucchini.

Zucchini is a summer pumpkin that is harvested while it has not ripened and its bark is still tender and edible. His skin is dark green, light green or intense yellow orange.

In botanical terms zucchini is a fruit, but it is treated like a vegetable in a culinary context and is often cooked and prepared in tasty foods. It is harvested when it is about 25 cm long because it loses good taste if allowed to age.

History and origin of zucchini

Zucchini (Cucurbita pepo) is a member of the cucumber and melon family. For several thousand years people in Central and South America have been eating zucchini but the one we know today is a summer pumkin variety developed in Italy in the 19th century near Milan. The ancestors of courgettes come from America. They were natives of Mexico today and the north of South America for more than 7,000 years. When the European colonization of the Americas began, they were taken to Europe where they began their cultivation.

Zucchini appeared in North America at the beginning of the 20th century, in the 1920s possibly brought by Italian immigrants.

Cucurbita pepo was the first gourd of the genus Cucurbita that was introduced in Europe.

There is evidence of zucchini consumption in Ancient Egypt and later in Greece and Rome. The Arabs extended their cultivation to the Mediterranean regions where it was a habitual food in the Average Age. In the north of Europe its regular consumption took until the times of World War II. The French despised the zucchini for a long time until the chefs learned to choose smaller, less soft fruits with less water.

Properties and Benefits of Zucchini

Ideal for weight control diets since it is composed basically of water and therefore is low in calories and diuretic. It provides fibre, folates, proteins and a large amount of vitamins A, B and C. It is also rich in minerals with a great deal of potassium, as well as sodium, magnesium, iodine, calcium and iron in smaller amounts.