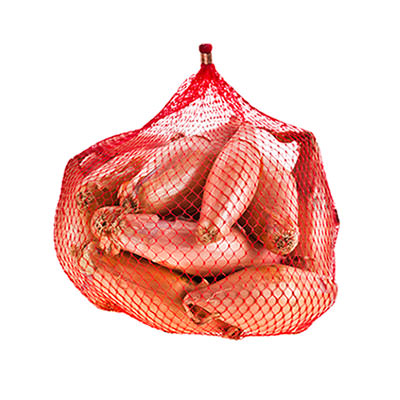 Product Availability:   No stock
Shallot is sweeter, tastier and softer than its parent onion, also less spicy than garlic. It is suitable for meat sauces.

We could put it halfway between the onion and the garlic. It is a bulb similar to a small onion that is much appreciated in French cuisine.

The best way to cook them is to simmer. Cooked is also more digestible than onion.

It is a long-lasting product since it can be stored up to 6 months.

The traditional canopy cultivation was developed in the 17th century in the French region of Brittany where it had optimum cultivation conditions due to the lang and climate. Since then the breton producers have made of their cultivation an art that follows based on the manual planting of a bulb.

It is easy to recognize the traditional shallot by the scar that carries in its base that is characteristic of its culture that gives a bunch of shallots after the planting of a bulb.

Raw shallots are used to make pickles.
In countries like Indonesia shallots are sold fried bawang goreng that are easy to find in supermarkets although many people prefer to eat them roasted. In Iran, shallots are crushed and eaten in yogurt. Shallots can be used in sauces, soups or curries. They are used in cream or butter sauces to improve the taste. Indonesian and Thai cuisines use condiments made from shallots. It is so versatile the shallot that can also be used in salads.

History and origin of the shallot

The shallots probably originated in the center or southwest of Asia from where they traveled to India and the eastern Mediterranean.

Its botanical name Allium ascalonicum (now officially Allium cepa gr. Agregatum) refers to the Port of Ascalon, in Palestine, which is now known as the Ashkelon spa in Israel. This name was given by the ancient Greeks.

The shallots were already a staple food in ancient Egypt and the Persians considered it a sacred plant.

They were introduced into Europe by the Crusaders who returned from Palestine in the eleventh century. From the twelfth century, shallots were grown in Brittany and in the Anjou, the two traditional French regions producing shallot. To this day, shallots continue to be traditionally cultivated in these two regions; however, they are now also grown in northern France and in the Drôme.

Farmers have created new varieties with an improved form that also improves yield and storage qualities. Today, canopy farmers can choose from a selection of more than ten varieties of certified shallots plants, many of which can also be purchased by amateur gardeners.

Properties and benefits of shallots

Shallot is used as a cosmetic to get rid of freckles, as a cold remedy, for pain relief and as a mild diuretic. The juice of the plant can be used as an insect repellent, as a prevention oxide in metals And as a polish for copper and glass. When the plant is growing it is said to repel insects and moles.

Among its properties contain carbohydrates, vitamin A and C, sodium, potassium, phosphorus, iron and magnesium.

Shallots are a rich source of flavonoids that have antibacterial, antiviral, antifungal, antiallergic, antidiabetic and anticancer properties. These compounds prevent cerebrovascular, peripheral vascular, and coronary disease.
They contain diallyl trisulfide, diallyl disulfide and allyl propyl disulfide. These sulfur antioxidants are converted into allicin by enzymatic reaction.

Being rich in pyridoxine (B-6) help increase the levels of chemicals in the brain and reduce nervous irritability.