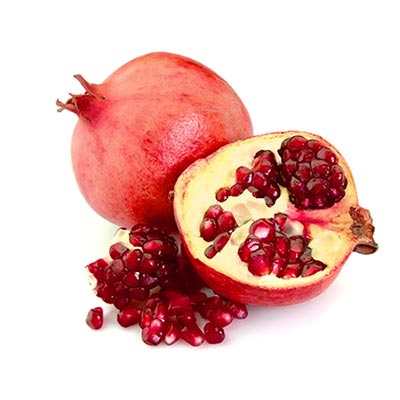 Product Availability:   No stock
Pomegranates are fruits with low content in carbohydrates and calories consumed as fresh fruit or as a salad ingredient, for cooking, baking etc.
3,61 €
Discount
Price / kg:
Ask a question about this product

It is a fruit of hard crust that varies in color since it can be yellow, pink or red hot. Its size can be defined between a lemon and a grapefruit.

The interior has compartments divided by white walls of spongy tissue which in turn contain lease bags with tasty, meaty and juicy pink or white flesh. In these bags it contains a soft or hard white or red seed representing about half the weight of the fruit.

Pomegranates can be used to make sorbets, drinks or Grenadine syrup or to accompany salads or cooked dishes.

The main producers in the Middle East are standing out among these China, India, Indonesia, Egypt and Bangladesh.

History and origin of the pomegranate

Based on excavations of the Bronze Age it is believed that pomegranate was one of the earliest cultivated fruits. Most historians support the belief that it originated in Iran and the Himalayas in northern India, later cultivated throughout the Mediterranean region of Asia, Africa and Europe, migrating eastward to China where it has been cultivated since the pre-Christian era.

The pomegranate was brought to Egypt from Syria during the reign of the Hyksos in 1600 BC. In 957 BC Solomon's temple was built in Jerusalem decorating the pillars with pomegranates that were also included in the robes of the Jewish priests. They were then introduced into Rome through Carthage.

Zoroastrianism became the main religion of ancient Persia and pomegranates trees were planted in their temples as they were a symbol of eternal life. In Buddhism, the pomegranate is one of the three blessed fruits and represents the essence of favourable influences in Buddhist art. The fruit also figured prominently in the Greek myths place.

Since pomegranate is a symbol of strength in the Persian culture, the Persian army of Xerxes carried spears with pomegranates instead of nails at the point when they invaded Greece in 480 BC.

They first came to China from the Middle East through the legendary Silk Road between 138 and 125 BC.

The production and printing of the first Bible between 50 and 85 AC include elements of the Torah, known as the Old Testament. References to the shells remain intact. Pomegranates have been a central part of many religions. Through the centuries, pomegranates were represented in Jewish money, furniture and religious objects.

Around the year 600 AC Islam Muhammad had great respect for pomegranate, considering that it was nutritious for physical and emotional health.

By 1500 AC the fruit had also become an important symbol in Christianity, representing the resurrection of Jesus.

In India, the Hindu pomegranate has been a symbol of prosperity and fertility for centuries and is believed to bring good health. It has also a prominent place in Indian art, found in several avatars of Ganesha.

As the pomegranate market opened in Europe it had become more a symbol than simply a fruit and was portrayed regularly in art, literature, religion and mythology.

Over time Western cultures come to value pomegranates for its medicinal properties and appear in several coats of arms which symbolize the nobility.

The pomegranate came to America through Spanish missionaries. When Cortez conquered the Aztecs in 1500, the pomegranate trees were planted in Mexico then spread north to the missions in California and Texas. In 1771, Thomas Jefferson planted pomegranates in Monticello, his plantation in Virginia.

Around the year 2000, the popularity of pomegranates began to grow and emerge again until our days being rediscovered as the sweet and appetizing fruit it always was.

Properties and benefits of pomegranates