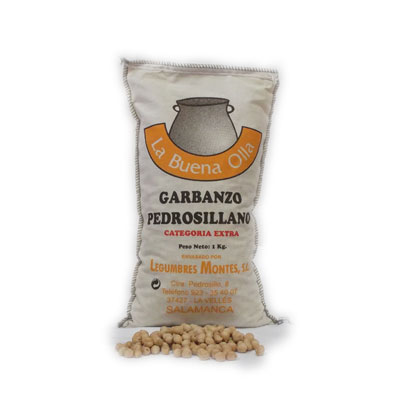 Product Availability:   In stock
The pedrosillano chickpea has a rounded shape and a small size. It is easy to cook and its skin does not come off transmitting all its flavour to the plate.
2,40 €
Discount
Price / kg:
Ask a question about this product

This variety is usually cultivated in the provinces of the communities Castilla la Mancha and Castilla y León (Spain).

Its name comes from the historical production carried out in the municipality of Pedrosillo el Ralo in the province of Salamanca (Spain) but also in Pedroso de la Almuña. There is also production in Seville and other parts of Spain.

In spite of its small size, being inferior to the Castilian and other varieties is one of the chickpeas more appreciated since its small size offers inferior cooking times compared to other Spanish chickpeas.

One of the characteristics most appreciated in this pedrosillano chickpea is its fine skin that does not detach itself like the rest, which gives it a special flavour.

Its shape is rounder than the one of the Castilian chickpea and shows a creamy and orange colour with well-defined lines.

This variety today is one of the most consumed and appreciated although it was not always this way because its small size made it lose value against other varieties.

Ana Maria Salum
Provenance
Castile and León
Back to: Legumes