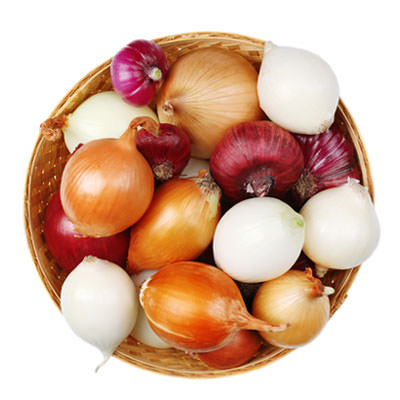 Product Availability:   In stock
Onions are one of the most appreciated foods in all the cuisines of the world grown for more than 5000 years.

History and origin of onions

It is difficult to place the location and time of birth of onions since they are small and their tissues hardly leave a trace. Despite this, many archaeologists, botanists and historians locate their origin in Central Asia while other investigations give us the theory that they were first cultivated in Iran or Western Pakistan.

Onions were believed to be a staple in the prehistoric diet even before agriculture and writing were invented.

Most research agrees that onions have been grown for more than 5000 years. They grew wild in many regions of the world so they were consumed and domesticated simultaneously throughout the world. Onions are likely to be one of the earliest crops because they were less perishable than other foods of the time, could be transported and were easy to grow in different soils and climates.

It was a very useful food for the human being because it prevented thirst and could be dried and preserved for later use in times of famine. Although the place and date of its origin is still a mystery, many documents from very ancient times describe its importance as food and its use in medicine, art and mummification.

5000 years ago onions were already growing in Chinese gardens and are referred to in the oldest writings of India.

In Egypt the onions date back to 3500 BC. There they were considered an object of worship that symbolizes the eternity that buried them next to their pharaohs. The Egyptians saw eternal life within the onion because of its circle structure within another circle. There are paintings of onions inside the pyramids and the tombs of the Old and New World.

King Ramses IV who died in 1160 BC was buried with onions in the sockets of his eyes.

Onions were consumed by the children of Israel in the Bible and in India in the sixth century BC. C the famous doctor Chakra in his famous Charaka-samjita describes the onion as a medicinal food diuretic good for digestion, heart, eyes and joints.

Similarly, Dioscorides, a Greek physician of the first century, pointed out several medicinal uses of the onion. The Greeks used onions to fortify the athletes for the Olympic Games. Before the competition, athletes consumed pounds of onions, drank their juice and rubbed onions against their body.

The Romans regularly ate onions and took them on trips to their provinces in England and Germany. Pliny the Elder already wrote about onions and cabbages in Pompeii.

In the Middle Ages, the three main vegetables of European cuisine were beans, cabbage and onions. In addition to serving as food for the poor and the rich, onions were prescribed to relieve headaches, snake bites and hair loss. They were also used as rental payments and wedding gifts. Later the pilgrims brought with them the onions to the United States. However, they found that strains of wild onions were already grown throughout North America.

Properties and benefits of onions

ainhoa blasco
Back to: Fresh vegetables