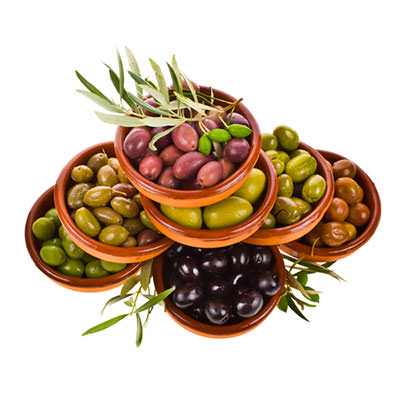 Product Availability:   No stock
Olive is a staple of the Mediterranean diet and one of the most versatile and consumed by the large number of variants that exist.

The table olives combine the four basic flavours that detect the palate, that is, sweet, salty, acid and bitter, which gives it a unique versatility  in the kitchen and without limits beyond the skill of the cook and his style to combine them in many culinary recipes.

Given the large number of existing varieties and forms of elaboration is one of the axes of Mediterranean cuisine and one of the most versatile foods on the market.

History and origin of olives

The olive is the fruit of the olive tree and this plant comes from Greece and Minor Asia where today we can still find forests of wild olive trees that grow without the typical alignment of the cultivated plants.

It had great importance in the Roman, Arab and Phoenician culture.

Although initially used for the extraction of oil, there are references from the first century in which its direct consumption is already mentioned.

This millennial crop extended widely throughout the Mediterranean area that encompassed Europe, Africa and Minor Asia. In America was introduced in the XIV century by Spanish colonizers as is the case of many other plants.

In the Bible there are about 400 mentions to the olive tree or its oil.

The first written documents about the olive tree come from the reign of the king Mino in 2,500 BC. Which give evidence of the importance of olive oil for the Cretan economy. Both the fruit, its branches and the olive itself appear in a multitude of Egyptian hieroglyphs.

In Greek culture the olive tree is a fruit of divine origin, symbol of peace and wisdom.

The great expansion of the olive tree is due to the Roman Empire.

Spain is leader in olive production

The olive was a basic component in the daily sustenance of farmes of Andalucia and Extremadura in Spain during the centuries XIX and XX.

At the end of the 19th century the first table olives in Spain began to be cultivated on an industrial scale, the so-called "Sevillanas or greens with the spanish style" in the province of Seville and more specifically in towns such as Dos Hermanas or Alcalá de Guadaíra among others.

Since then, Spain has been the main producer and marketer worldwide, exceeding 8 million tonnes per year since our country has a great variety of olives that are highly appreciated in other countries.

SAP
Back to: Artisan products