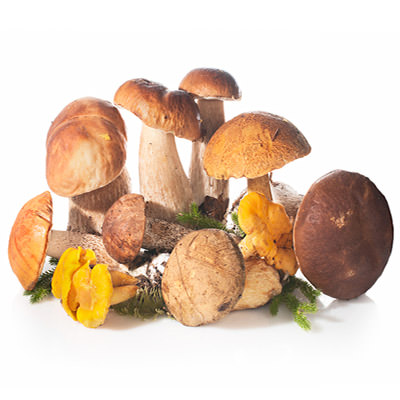 Product Availability:   In stock
Mushrooms contain some of the most potent natural medicinal compounds on the planet. Nowadays is a basic element in world cuisines.

History and origin of the mushrooms

We must go back to the Palaeolithic and the Neolithic to talk about the origin of the mushrooms. In the region of Murcia and the spanish Levante these mushrooms left their mark on rock art.

Its harvest is located more than four centuries ago but much earlier they were picked up in the forests. Its word fungo (mico) comes from the Greek "mykés".

The first reliable evidence of mushroom consumption was in China several centuries before our era.

Both the Greeks and the Romans knew the medicinal, toxic and gastronomic properties of these fungi. The Roman Caesars used mushroom testers to make sure they were not poisonous. The Celts in addition to being used as food used them in celebrations for their hallucinogenic properties in some species.

In Chile, species of edible mushrooms were found in archaeological sites with more than 13000 years of antiquity.

In the Middle Ages the consumption of certain mushrooms was limited to the privilege of some gentlemen. This fact is evident seeing the name of some species like the mushroom named "Caballero".

In Europe, the first cultivated mushrooms, was introduced in the XVII century being France the first country to control some of these plantations. Some accounts say that Louis XIV was the first grower of mushrooms. Around this time the mushrooms were grown in special caves near Paris reserved for this unique form of agriculture.

From France, gardeners in England found a very easy-to-grow crop in the mushrooms that required little labour, investment and space. The cultivation of mushrooms began to gain popularity in England with more experimentation and advertising in magazines.

They were introduced to the Netherlands for the first time early in the 19th century, but it was not until after 1900 that they were cultivated on a large scale in the Marburg mines in Limburg. In the early years, the mushroom was still very exclusive and only available to the elite. However, since then, better and more effective methods have been developed and there has been a huge increase in mushroom cultivation. At the end of the 19th century, the production of mushrooms crossed the Atlantic towards the United States.

It was only after 1950 that the Dutch consumer became familiar with the mushroom, and meanwhile in the Netherlands there are several areas specializing in the cultivation of mushrooms, mainly south of the great rivers. The cultivation of Dutch mushrooms is especially known for the strict control it maintains in the crop.

China is currently the world's largest mushroom producer followed by the United States and the Netherlands. The production of mushrooms has experienced a huge boom becoming a food affordable to all pockets.

Properties and benefits of mushrooms

According to mycologist Paul Stamets of the 140,000 species of mushrooms, science is only familiar with 10 percent. There remains a lot of open research but of the edible varieties we know today these are some of the most remarkable benefits:

Virginia Yoldi
Back to: Fresh vegetables