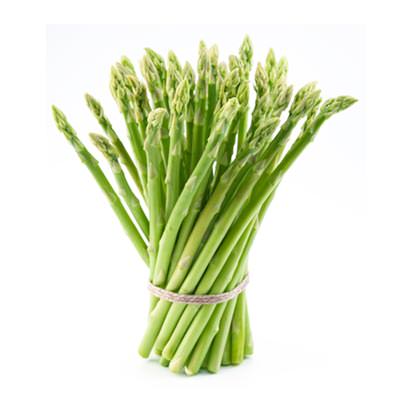 The asparagus admits hundreds of preparations in gastronomy and in its simplest form the shoots are cooked in water or steamed until tender and served with melted butter, light sauces or a few drops of grated Parmesan cheese and oil.


Unlike most vegetables the thicker the asparagus, the tenderer it is.


With small asparagus or yolks you can cook asparagus soup. It is also very common to make asparagus scramble with shrimp, chicken or beef.

History and origin of asparagus

This garden plant originated in the Eastern Mediterranean countries and traces of wild varieties have been discovered in Africa. Historians and archaeologists believe that it was also cultivated in Egypt.

What we know for sure is that green asparagus has been consumed for over 2000 years.

There is a recipe for cooking asparagus in the oldest preserved recipe book. This is from the 3rd century its author is Apicio and the title is "De re coquinaria".

In ancient Greece there was already interest in the pharmaceutical and biologic qualities of asparagus and this plant was said to have aphrodisiac and sacred virtues. Hippocrates already used it to treat diarrhea and pains of the urethra.

The Romans also appreciated the gastronomic qualities of asparagus and consumed them as appetizers or starters or as a vegetable that accompanied the fish.

Asparagus was forgotten during much of the Middle Ages but its cultivation continued by the Arabs. Cesar's legions returning from the East brought the asparagus to Europe.

From the sixteenth century the asparagus was served in the royal courts of Europe and in the seventeenth century was cultivated in France for Louis XIV who was a great fan. At that time it was a tiny plant cultivated exclusively for the nobility. It is from the XVIII century when the asparagus appeared already in local markets and in different culinary works.

The green asparagus is found in China and America and the white variety is grown mainly in Europe.

The word asparagus comes from the Latin "sparagus" which in turn derives from the Greek "aspharagos" or "asparagus" and the Greek term originated in the Persian "asparag" that means "outbreak".

Properties and Benefits of Green Asparagus

Asparagus are low in calories and contain 90% water. They are a great source of fibre and folic acid and this makes it an ideal vegetable for weight control diets.

Its features and benefits include the following: