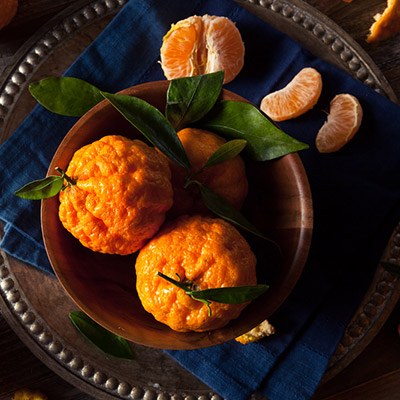 The Gold Nugget variety is a very sweet and aromatic mandarin, seedless and easy to peel.

It receives its name by its golden colour and its skin of pebble. The Gold Nugget (brother variety of the Pixie) is characterized by the long harvest period because it has a much longer season than most varieties of mandarins. This type of mandarin is kept in tree from the spring (February-March) until the summer (July-August).

This tangerine is consumed in fresh usually undoing of the shell and separated in sections like any other mandarin but also usually is used in salad, preparations of baked desserts, frozen or in milkshakes and cocktails.

The Gold Nugget Mandarin was developed at the University of California at Riverside in the 1950s and was not released until 1975 when a disease resistant stem had been established.

It is classified in botany as Citrus reticulata and appreciated as late season variety. Technically it is a tangerine hybrid that comes from a cross between the Wilking and Kincy, two non-commercial breeding varieties.