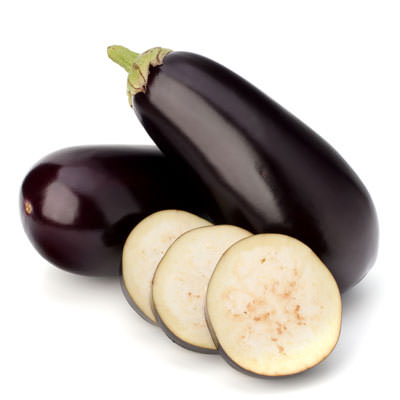 Product Availability:   In stock
Eggplant in addition to good flavour provides a lot of basic nutrients and has a very low calorie contribution. It is ideal for weight control.
2,88 €
Discount
Price / kg:
Ask a question about this product

The edible fruit is a berry that can measure between 5 and 30 centimeters in length. It has a cylindrical shape, usually oblong or elongated.

The pulp is of a spongy texture, white and consistent. Its flavour has a bitter touch and contains internal seeds of yellow colour. Today it is available all year round.

The skin is shiny and smooth and has different colours depending on the variety. The most common is purple or black eggplant when ripening but there are purple, black, yellow, red and with several colours mixed in the skin of the fruit.

History and origin of eggplant

Its cultivation goes back to 2000 BC. and its origin is located in Southeast Asia since many written documents place it there.

Specifically it is in Assam in India, Burma and in China where it is located the data collected with greater antiquity.

The eggplant was carried by Arab merchants through the Silk Road beginning this process around the 6th century. However eggplant carvings have been found in two regions of the Mediterranean (Iassos and Phrygia) of the second century. It is believed that these samples could be brought from the expedition of Alexander the Great to India.

In the Middle Ages it was introduced by Europe in the Muslim Spain from where it extended to other countries of the Mediterranean.

The ignorance of the time in front of the culinary treatment of inedible varieties of eggplant created a bad reputation on this food since it caused digestive problems. This bad reputation meant that during the first centuries in Europe it was used as a decorative ornament and not as the food we now enjoy.

Eggplants were introduced in America by Spaniards.

Today the world's largest producers are China and India, although their production and consumption is also widespread in Japan and in Mediterranean countries such as Italy, Spain and Greece.

Properties and Benefits of Aubergines

It is an antioxidant improving cellular activity. That purple hue of the skin is due to the high content of anthocyanins that protect against serious diseases like cancer, hence it is more than advisable to cook it with the skin.
It is a purifying food thanks to its high contribution in fiber clean our body and reduces cholesterol.
Also diuretic because of its high content in water helps eliminate toxins and fluids from the body.
The eggplant is rich in iron and magnesium, contributing large amounts of these. It therefore strengthens the defenses, improves the functioning of the heart and muscles and prevents anemia.

Remember to always cook this vegetable since raw contains toxins that are removed with the heat of cooking.

It can be roasted, grilled, baked or steamed, also fried although it absorbs a lot of oil and is not recommended for a good digestion.