Product Availability:   In stock
Cherimoyas are tasty, sweet and juicy fruits that you can easily cut it in half and eat with a spoon.
6,72 €
Discount
Price / kg:
Ask a question about this product

The cherimoya is a berry with numerous shiny black seeds. Its skin is smooth and creamy and contains an aromatic white flesh. Its green and when ripe takes a warmer tone. The seeds inside are used to make insecticides, so it is not advisable to consume.

It is consumed mainly as fresh fruit. It is also added to fruit salads and sorbets and can be used to make compotes, jams, smoothies or ice cream.

Cherimoyas not withstand the heat of cooking and lose all their scent so it is best taken in fresh or use them as discussed above.

History and origin of cherimoya

Cherimoya originated in tropical America. Some historians cite its source in northern Peru, southern Ecuador and parts of Chile, in the mountains of the Andes. Archaeological excavations uncovered fruit representations made by pre-Columbian tribes.

Traditionally it was said to be originated in the West Indies although evidence of a wild variety in Guatemala and Belize point to the region of South America as a possible point of origin.

From its place of origin spread to Central America, southern Mexico and northern South America.

It was introduced in southern Spain in 1757 in the area of ​​Motril, Salobreña, Almuñécar and part of Málaga. It was cultivated as a garden tree until 1940 where he gained prominence in the province of Granada as a replacement for the many orange trees that succumbed to disease.

The first planting in Italy was in 1797 in the province of Reggio Calabria.

It has been tried several times unsuccessfully to plant in the botanical garden of Singapore since 1878 but always failed due to the tropical climate. In the Philippines was planted without trouble in the mountainous region in altitude of 750 meters.

It was introduced in India and Ceylon in 1880. The tree was planted in Madeira in 1897 and later in the Canary Islands, Algeria, Egypt and, probably via Italy, in Libya, Eritrea and Somalia.

The United States Department of Agriculture imported a number of seed lots of cherimoya from Madeira in 1907. Seeds from Mexico were planted in California in 1871. There were 9,000 trees in that state in 1936, but many of them were destroyed by a freeze in 1937. Several small commercial orchards were established in the 1940s.

Properties and benefits of cherimoyas 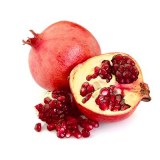