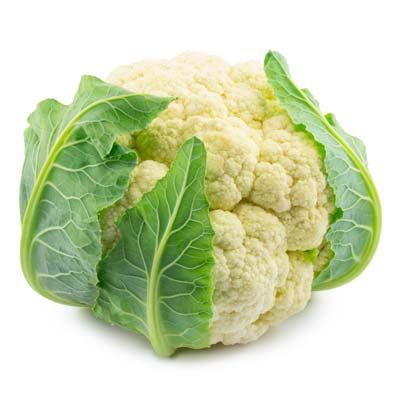 Product Availability:   In stock
Cauliflower is the favourite vegetable among the family of cruciferous and the most consumed because of its high fibre content and low fat level.
2,40 €
Discount
Price / kg:
Ask a question about this product

Modern cauliflower is available throughout the year although in the northern hemisphere and is best months are between September and January. It is a variety related to broccoli to which it has some similarity.


From the same family of cauliflower is broccoli, watercress, radish or turnip among many others but certainly the cauliflower is the most popular and consumed of them all.


There are many species but currently the most commercialized are white, green or purple.

History and origin of Cauliflower

In the sixth century BC we found the oldest record of cauliflower.

In the first century Pliny included cauliflower in its natural history record of cultivated plants. He speaks of heads in the form of flower of predecessors varieties of the modern cauliflower.

The origin of the cauliflower is linked to the eastern slope of the Mediterranean with minor Asia, Syria and Lebanon as historical references of this vegetable.

As it happens in the origin of many other vegetables, we now have different theories described as the one that associates the origin of the cauliflower to a unique wild species introduced in this area from the European Atlantic zone.

Initially its use was limited to a natural healer to relieve diarrhoea or headaches and the Romans were the first to cultivate them for production, consumption and trade. The conquests of the Roman Empire introduced the cauliflower in several countries bordering the Mare Nostrum.

In the sixteenth century England and France began to cultivate them and in the seventeenth century was already a popular cultivation in most of Europe. Cauliflower arrived to Spain in the 18th century from Syria where it had been cultivated for more than 1000 years. During the 19th century the cultivation of cauliflower finally spread throughout the world.

In America it is mentioned in writings of 1800 but until the 1920's was not available in commerce's around the United States.

Its cultivation and production is currently widespread but China is the main worldwide producer of this vegetable.

Properties and benefits of cauliflowers

"Cauliflower is nothing but a cabbage with a college education," said Mark Twain.

This food can be eaten raw but if you steam it will retain great part of its properties and benefits and is the way that we recommend. It is a vegetable despised by some by the bad smell that causes its cooking and the flatulence that provokes in some people. The fact that its most popular variant is white instead of green makes our subconscious incorrectly think they are not inferior to other green vegetables in terms of benefits for our health.

Me animé a hacer un pedir coliflor y ya he repetido, como siempre no me han defraudado, OK a Comenaranjas