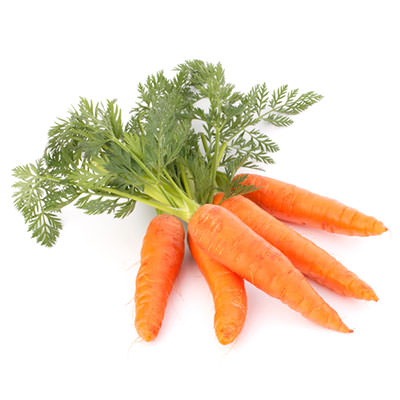 Product Availability:   In stock
Carrots are a truly nutritious food and stand out for their content in vitamins and minerals. You can enjoy them loose or tender in bundle.

The carrot is one of the most produced and consumed vegetables in the world that we can taste boiled, raw, liquefied, cooked or fresh. Contains low caloric value and gives us vitamins, minerals and antioxidants.

History and origin of carrots

Carrot is one of the most important root vegetables grown in temperate regions around the world. It is descended from the wild carrot that has whitish roots of ivory colour. The orange carrot that we know today is the most popular and is derived from domestic varieties with yellow roots. The oldest carrot defined as such appears in the tenth century in Persia and Asia and was very different from today's orange carrot. It is believed that originally the carrots were white or purple with a fine root and a mutation caused it to lose its purple pigmentation by emerging the yellow carrots from which the orange appeared later.

The first crop of carrots is cited in the region of Afghanistan. Long before the carrots were domesticated and cultivated the wild ones had spread since seeds were already found in Europe more than 5000 years ago. Wild carrots are still present in temperate regions around the world, even far from its centre of Asian and Mediterranean origin.

The cultivars of carrots are grouped into two large classes, the Eastern and Western carrots.

The Eastern carrot comes from Central Asia, specifically in Afghanistan in the Himalayan and Hindu Kush region. It was cultivated in Afghanistan and in the adjacent regions of Russia, India, Iran, Pakistan and Anatolia in the tenth century or even earlier. Today, in the daytime, there are purple and yellow species. The purple carrot along with the yellow variety spread through the Mediterranean region and Western Europe between the XI and XIV centuries and from there to China, India and Japan in the fourteenth and seventeenth centuries.

The western carrot originated in the Netherlands in the fifteenth or sixteenth centuries becoming very popular for its orange colour. However we must not forget that there are white carrots, white, yellow, red or purple, many of them developed in modern times. Dutch local varieties were first described in 1721 as being an important base of western carrot cultivars today.

Properties and Benefits of Carrots

We know that this food is good for the eye and helps to brown the skin but there are many benefits of this vegetable, including: