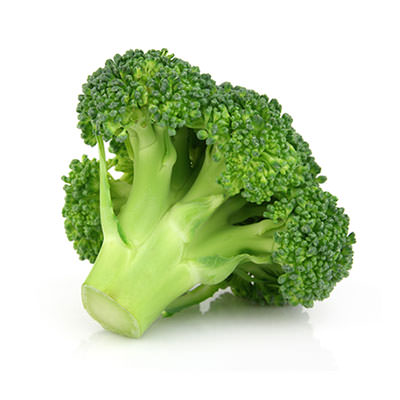 Product Availability:   In stock
Broccoli is a green plant with abundant floral and edible heads shaped like a tree. It is recommended for its many health benefits.
2,16 €
Discount
Price / kg:
Ask a question about this product

Broccoli is a food created by man through a culture and select mutations of the human being throughout history. Its stem is also edible. We could call it a green cauliflower.

It is known for its green colour and its resemblance to a tiny tree. Broccoli is the result of selective breeding of wild cabbage plants beginning around the 6th century BC.

The name "broccoli" comes from the Italian term "broco" that means arm branch. This term refers to the peculiar ability of the broccoli to regrow and the lateral shoots that occur after the cut of the main head.

History and origin of broccoli

The origin of the broccoli is uncertain although the most widespread theory is that they come from the coasts of the Eastern Mediterranean and Middle East where Syria, Turkey or Greece is currently found.

Its diffusion by the world was attributed to Roman, Greeks and Muslims navigators among others arriving later to England, Spain and the rest of countries where it is cultivated nowadays.

In the time of success of the Roman Empire the broccoli would arrive to Italy where it was cultivated for consumption becoming really popular. It was cultivated in Italy in ancient Roman times and was introduced in England around 1720 and in America probably in colonial times.

Pliny the Elder shaped the Roman enthusiasm for this vegetable in his work.

The Saxons and Celts were the first to cultivate them in northern Europe.

Until the middle of the 20th century its production would not be developed in Europe.

In Spain, large-scale cultivation began in the 1970s when exporting companies from the Valencian Community grow it for export and fresh consumption. Later it would extend to other regions like Murcia or Navarra where there is more product for industrial processing like the frozen one.

In the United States broccoli was not popular until the 1920s.

Properties and Benefits of Broccoli

Boiling broccoli makes it lose some of its benefits and to make the most of them, it is best to steam, bake, microwave or stir-fry in wok. Here are some of the benefits of this delicious vegetable: